For a few years I’ve wanted to run a half marathon, but the idea of it was really intimidating.  This summer, I decided to go for it and started training!

I planned on signing up for the Rock and Roll Savannah after hearing good reviews and that it had a flat course.

I signed up for a training plan on RunKeeper and 3 weeks in, my body was yelling at me to quit (there wasn’t much rest built into the plan).  I took a few days off, and reevaluated. Over the years, I had read about Hal Higdon’s plans on different occasions, and finally decided this was the plan for me because of the cross training options.

Fortunately the training, although a little time consuming, was doable and much kinder on my body.

Until the month before the race. October happened to be one of the craziest months of my life, and I don’t think I trained at all. Not good when you’re planning on running 13 miles straight.

After much encouragement, I decided to still try, but to readjust my goals for the race. Originally I wanted to finish under 2:15 and run the entire race. My adjusted goal was 2:30 and to complete, even if walking was required.

We arrived to the start line that morning about 30 minutes prior to start time. What I didn’t know was that we’d be started in shifts and really wouldn’t start until about 30-40 minutes later. This turned out to be good news because I may have had to use the bathroom twice while we were in our corrals. #BlameItOnTheNerves

So a little while later, we were off! Some of our friends from church were also doing the race but I couldn’t find them prior to the start. About two minutes in I was able to catch up with one of them and we stayed with each other for most of the race.

As you’ll see in the picture below, it was extremely foggy and humid – even at our early start. By mile one I was already really sweaty, and even had a stomach cramp – which I didn’t have the entire time training. 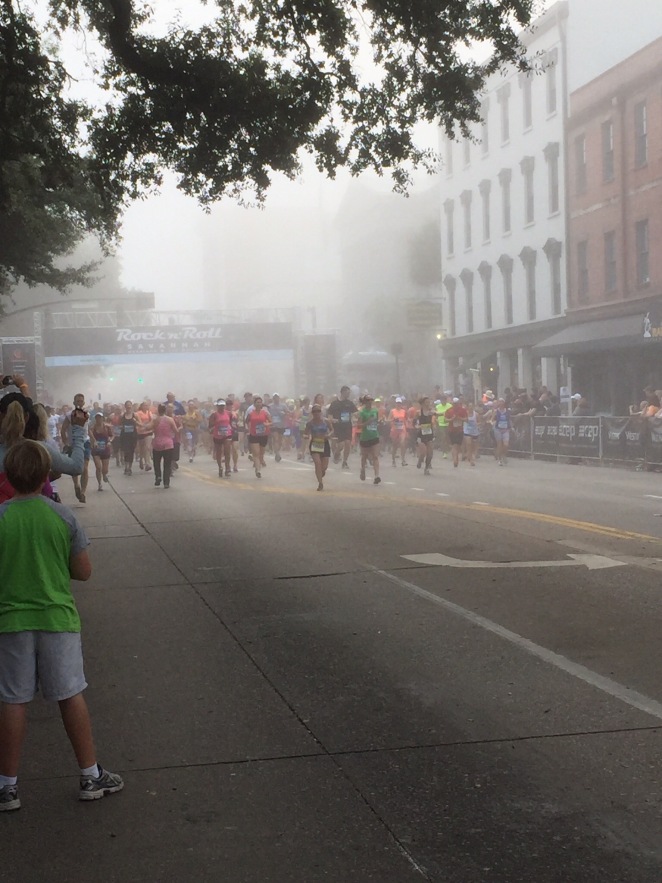 Unfortunately things continued to get warmer. I honestly didn’t think much of the temperature but more of the humidity.

Mile after mile, I felt pretty good and happy with the pace I was running until mile 10. At one of the water tables they had an ice bag sitting out, and I remember scooping up some, not caring about how unsanitary that probably was, just to get something cold in me.

Around mile 11, I noticed that my heart rate was up more than normal and I felt a little lightheaded. Obviously it wasn’t worth the risk of passing out. It was a little bit sad to stop running and walk but I felt confident in my decision – until I started running again and I realized my legs were pretty much dead at that point 😉

As I got closer to the finish line, I was so happy that I had almost finished a half and overcome something that I feared to try for so long. I think more than anything, it was a mental accomplishment, knowing that I can push myself to do things with hard work.

Crossing the finish line was a wonderful feeeling – and not just because they had ice cold water and Gatorade available – but that was pretty exciting. 🙂

Hopefully I’ll do another soon and beat that time!

ps – my watch. Such a jokester. This was AFTER I finished. #Nope 🙂

Yesterday marked one month from the day Gary and I and our friends started the Advocare 24 Day Challenge {now affectionately known as the #PatwellAdvocareChallenge2015}.  Although we finished the challenge last Wednesday, it was and has been a great tool for us to help get our eating back on track and even prepare our bodies for our trip to Madagascar! 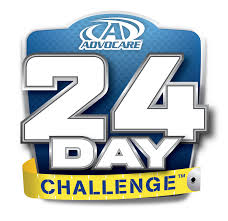 I had heard and read about the Advocare 24 Day Challenge {A24DC} for a few years and was always intrigued, but was ultimately never interested because of the cost.  When one of our friends said she wanted to try it, I told her I would do it with her – because I’m much more likely to do something with someone else.  Then we  convinced our husbands to join in on the challenge.  While it was an investment to do the A24DC, I think that made us more committed to staying as close to plan as possible.

So what is it?  Well for us, it was a better way of eating as well as taking assigned supplements and vitamins.  The “diet” allows you to eat whole foods, and recommends eliminating dairy, bread, sugar, and coffee.  There are two phases of the challenge – the first 10 days {the cleanse} and the last 14 days {the max phase}.  The website above explains more about both of the phases.

Overall I learned it’s called a challenge for a reason.  It wasn’t easy.  I missed cheese and bread alot.  Eating out was almost impossible. And being in a group setting with food limitations is not fun.

But I did feel better.  I found that a few days in, getting out of bed in the morning was easier.  I decreased my 5K time and was able to push myself harder in cardio.  I was happy giving my husband good and nutritious food versus easy foods. And I felt good about not having processed sugar in my diet.

Here are some of the notes I took during the challenge!

Here are some of the things we ate during the challenge!

Finally, here are some we learned during the challenge!

So that’s my review of the Advocare 24 Day Challenge?  Have you ever done the challenge?  Comment below with any questions!

These are the some of things that I did this month and I finally crossed it off the list – work out every day for one month for at least 45 minutes a day.

{picture taken on one of my morning runs}

When I wrote my 101 in 1001 list, I didn’t think to specify that I meant 45 minutes a day on weekdays, so I made myself exercise 45 minutes a day everyday, which takes more discipline than I usually have {just ask my husband who saw me doing some of these exercises at 10pm because I had put them off all day}.  This morning I finished the 30 days of 45 with a 5 mile run {well technically a 4.75 mile run and a .25 walk}.

My favorite benefit from working out everyday? This month I had considerably less headaches.  While I can’t say for certain that exercise was the reason, there are articles that support this {here, here, and here}, and exercise was one of the only two things I changed this month to my regular routine {the other being I drank 72 oz of water a day, which has also been linked to decrease headaches, more on that later}.

So here’s to hopefully a new habit sticking around and to headaches staying away.

How often do you workout? What are your favorite exercises?